During the summit of second world March for Peace and Nonviolence in Nepal, we got an opportunity to visit Budhanilkantha Temple located in Kathmandu Metropolitan City. Beside visiting this historical temple, we did visit Hanumandhoka Durbar Square and Hotel Sabrina too.

Contents of the Article

On January 25, the second World March for Peace and Nonviolence we paid visit to Budhanilkantha Temple early in the morning at 8:00 AM. 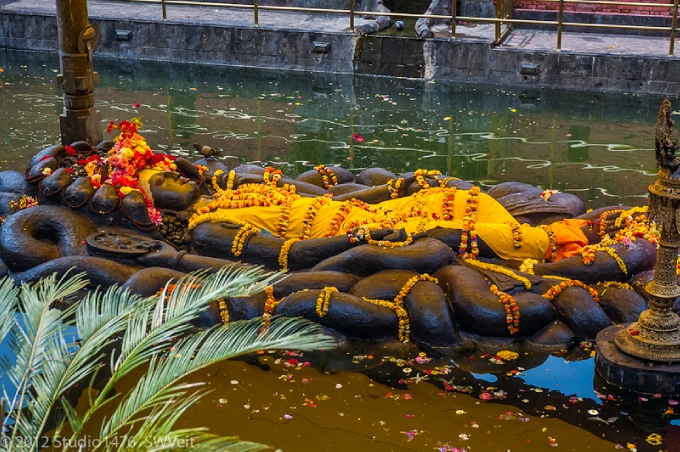 The temple of Budhanilkantha (Narayanthan Temple) is a Hindu-religion open-air temple built in devotion of Lord Vishnu is in Budhanilkantha, in lap of the Shivapuri Hill at the northern end of the Kathmandu valley.

After that, we caught the local bus and reached to Hanuman Dhoka, Durbar Square. Today we witnessed number of audiences of young children from some high school classes as well as primary classes. Majority of very young girls were in Nepali cultural dresses welcomed us.

The students were standing in circle and with Y shape inside the circle. Mr. Marco jumped in and he moved to some students and completed the peace symbol. I went on second floor of School building and tried to capture the full pictures of Peace Symbol, but the space was not enough so it was very difficult to capture accurate picture of peace symbol.

I tried to recorded video of all students and tried to ask about the activity. When, I focused on Pakistan banner which was in the hands of few young Nepali girls. They asked, are you form India? we said No, we are representing Pakistan here. “Thank you babies for holding Pakistan’s Banner”, We thanked them. They shared with good gesture that we preferred to choose Pakistani banner because, “Pakistan is SAARC country and Pakistanis are our brothers, we love our brothers”. I said, we love you too my daughter, again thank you for your support.

Ms. Tulsi Sigdel again thanked to all of participants and briefed the aims and objectives of second world march for peace and nonviolence and relied the questions of students and teachers.

The place was so beautiful under the cloudy sky, we enjoyed a lot and captured some clicks with lovely children, Nepali friends and HM logos and banners.

It is our social responsibility to spread peace and build nonviolence and loving world. We all professionals, students, businessmen and peoples of the world should feel the weight of social responsibility and raise our voice for peace. Nowadays, when peoples are fighting with different problems including, climate change effects, water insecurity, food insecurity, desertification, droughts, floods, heavy rains, cyclones, air pollution, poverty and conflicts, these efforts will contribute in building a happy and peaceful world.

In this situation there are two choices; either runaways for fight with issues, fight means nothing “war”, but we should unite for peace because war is not the solution of all these problems.

We should invest in

Join us to make this world free from weapons and war and without violence.

Kot Diji Fort pre harappan civilization – You Must Visit in 2021

ABOUT US
The world in Eyes is a daily lifestyle, Motivational, and Personal Development weblog for all which is the ultimate counseling manual for optimizing every aspect of your life. We always try to bring this beautiful world in the eyes of the reader. It is all about us.
Contact us: info.worldinmyeyes@gmail.com
FOLLOW US
© World in Eyes - All Rights are Reserved (2018-21)